I Can Draw This, But Can I Carve It?

Resident Artisan Nathan White ponders the intersection of drawing and carving, and design and perception, in his latest blog post. 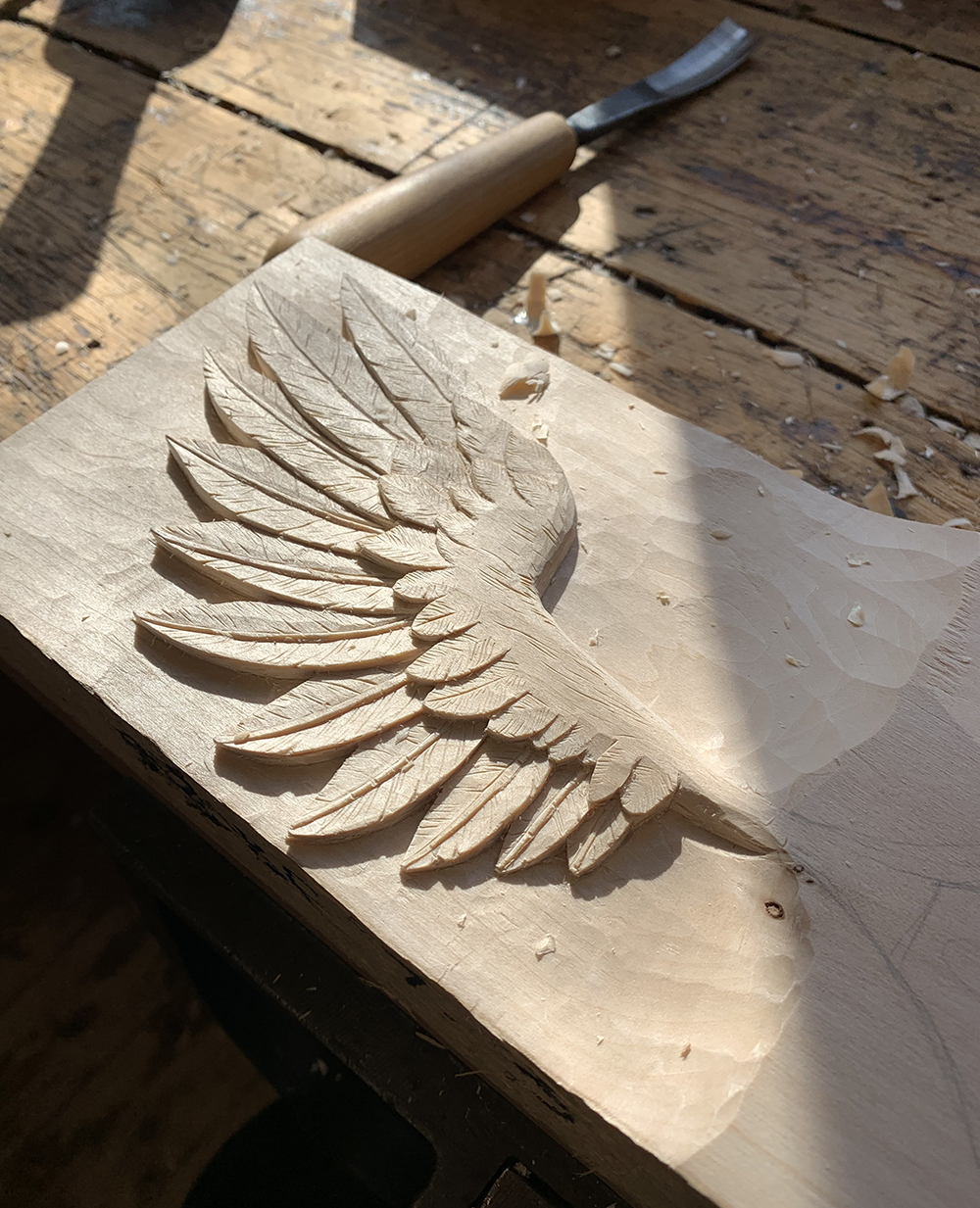 Over the past couple of years, I’ve been getting into relief carving, mostly just teaching myself by trial and error and letting my other experience in carving lead the way.  So far in my time in ADP, I’ve been able to assist both Phil Odden, and later, during wood week, back-to-back relief carving classes taught by Mary May.  Both of these instructors are wildly talented and accomplished relief carvers and I encourage you to check out their work.  My preferred way to learn is to watch someone do something and then try it myself, so it was great being able to sit in and watch both of these master craftspeople at work carving and teaching.  While assisting Mary May’s class, I was able to test out a challenging segment that I envisioned being a larger piece.  It was kind of a “I can draw this, but can I carve it?” experiment.  What I was working on was a bird wing, and despite being able to carve it decent enough for my purposes, I was glad I did it as a test, because the chunk of wood I wanted to carve it on ended up being too small for all the details I wanted to include.

At some point in Mary May’s class, the topic of drawing came up.  Specifically, the question “Do you need to be able to draw to do relief carving?” Short answer, no, or at least not necessarily; you can always trace stuff, or find other tricks to do layout.  If you do however want to something more involved and intricate, it definitely helps.  So, I’ve got the whole “being able to draw” thing going for me, which is nice.  Anyway, with the blank I had originally intended for the wing carving, I shifted the design, to now be a couple cascades of nasturtiums climbing up to a circle.  Within the circle I plan to make a mortise for a square rimmed bowl to slot into. 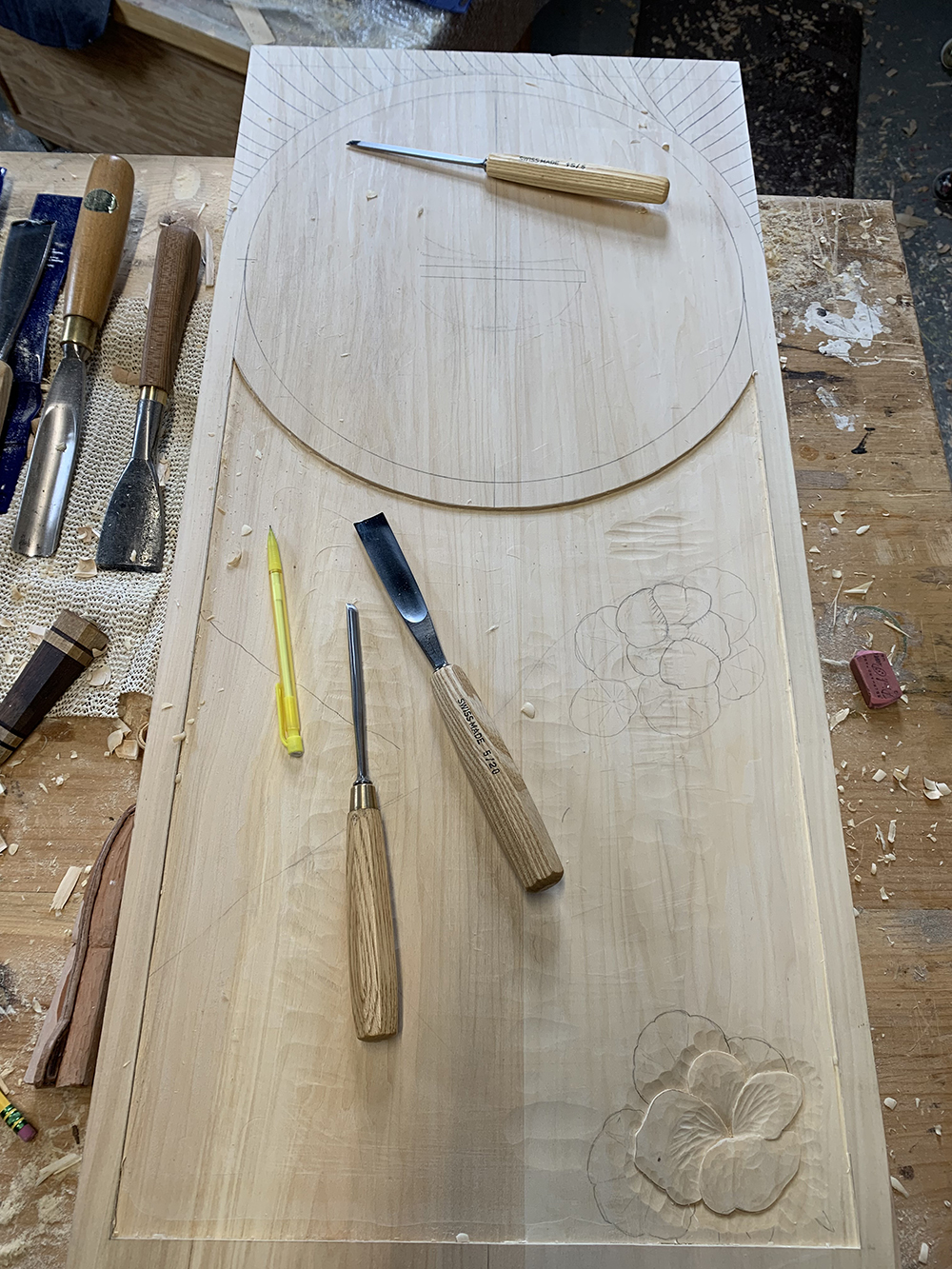 I’ve been making carvings like this also for the past two years originally as a part of a grant project.  The concept of the project was thinking of bowls as holders for sacred objects, and the carving that they were apart of as their housing, or placeholders, making an altar of sorts.   A phenomenon that I’ve noticed both through carving the bird wing, and starting the nasturtiums was being able to see when the thing I was carving had enough dimension, detail, and accurate proportions to let my brain recognize it as a wing, or flower, or whatever I was carving.  Each stage gets it closer and closer, and its wild when an action like softening/rounding an edge, or fairing out a curve, or adding depth, makes a chunk of wood look like something.  It’s all about figuring out what exactly I need to do to allow others peoples’ brains fill in the blanks and perceive what I’m trying to portray in my carving.  It almost feels like an illusion, or that exercise where words are intentionally left out of a sentence, but most people don’t even realize it, because their brains have been conditioned to iron it all out.  Its an interesting way to think about sculpture, especially relief carving that is 3Dish, and also to think about what information we use to perceive and see the world. 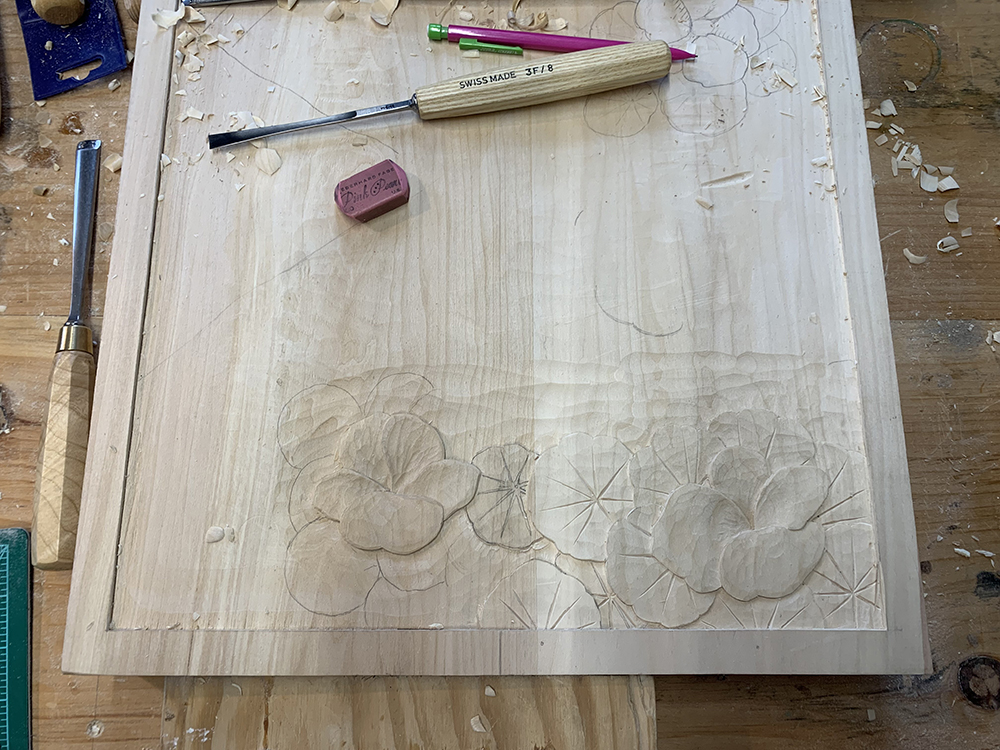