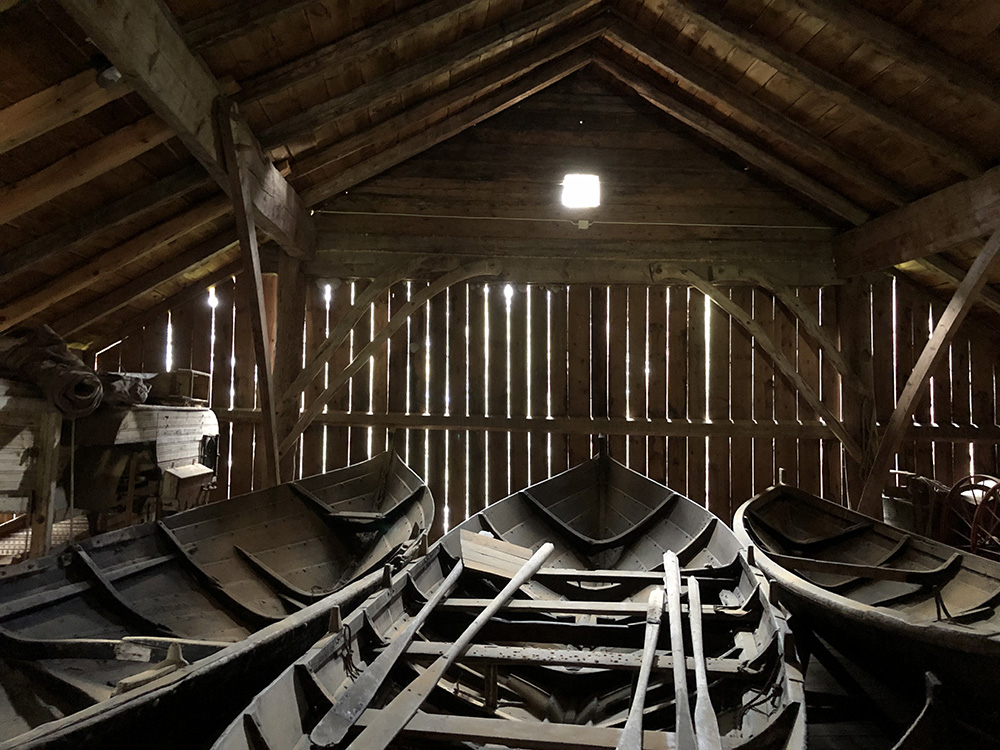 The regional variation of these grindbygg barns highlights the importance of travel in creating a contextual framework for studying craft.

This post is a continuation of my barn explorations in Norway. There have been many other inspiring parts of this journey but I think sharing the regional variation of these grindbygg barns highlights the importance of travel in creating a contextual framework for studying craft. It came naturally for me to find inspiration in pictures from afar but this closer investigation has really provided me with a much deeper understanding of these buildings.

In the last post I shared some details of grindbygg barns from Hordaland county. About a month further into the trip I had the good fortune to spend a week with Peter Brennvik from Vatne, a small town outside of Ålesund. Peter traveled with a group of traditional carpenters from Norway a few years ago that made a stop at North House to do some demonstrations and check out the school.

The town where Peter lives is in a district called Sunnmøre in the southern part of Møre and Romsdal county. Grindbygg is a very common building style in this area, but the buildings in this region have some distinct features that make it different from the barns further south. It’s very apparent the way that the landscape determines the materials used on these projects. In a more subtle way, the regional variations and adaptive methods also highlight how the landscape creates pockets of culture due to the difficulty of travel in these mountainous areas. 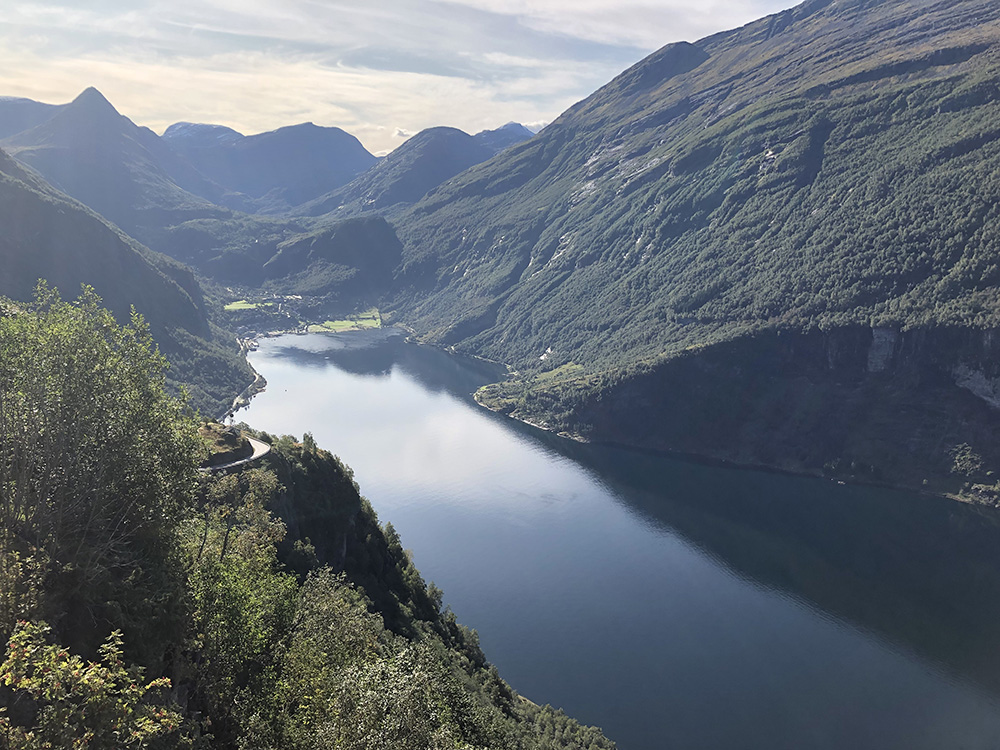 Just to the North of Ålesund is a small city by the name of Molde which, I am told, is the cut off point for grindbygg structures. North of that area different building styles including the Stavlinebygg were used for outbuildings. All the grindbyggs we saw in this area have a distinct type of joint at the post-tie beam connection which is similar to that of its cousins in the south. The braces are all naturally curved birch many which have a hockey stick shape where it connects to the tie beam and wall plate. The bottom of these braces are notched into the posts similarly to the barns from other regions. The braces on these barns are found on the inside of the frame rather than on the outside of the frame which, from a simple observation, doesn’t seem like a big deal but it means that the sequence and order of layout and construction had to be different than the barns found to the south.

Again, these buildings are defined by the resources available in these dramatic landscapes. As we traveled along the fjord to the east the elevation began to rise, the landscape became more mountainous, and the forests began to change shape as well. The birch forests are dwarfed by intense wind and snow.

Many of the trees were clinging to the side of sloping mountains forcing them to grow horizontally before reaching up for the sun. This curvy forest provided the farmers in this area strong full fibered braces that offered both advantages in space and structure. The Hockey shaped ends of these braces allow one to put multiple pegs into a single brace. These pegs rather than a brace pocket absorb the racking forces in the building.

It’s difficult to get the “feel” of the building by looking at photographs. The irregular but whole logs in the structures make the interior of the building feel alive. Additionally, many of these barns are perched on the side of steep fields so the post heights are adjusted to make the building level rather than doing any serious earth works to prepare the building site. This feature also adds to the animated feel of the buildings.

These barns also reveal the evolution of farming practices over the years. This fantastic barn can be seen at the Sunnmøre Museum outside of Alesund. It was originally built outside of Stranda in 1867. It is a very well thought out construction made with care. Though it is a little more methodical than some of the wild free form style barns I saw elsewhere in the region the natural crooked birch braces are still integral to the design. You can also see the curved u-shaped birch joist hangers that create additional lofted storage space. The real innovation here is the combined hay storage, cattle shed, and stable. The posts of this structure are 20 feet tall from top to bottom. The core of the building is a tall two story timber frame structure that encapsulates multiple separate log structures that provide weather proof shelter for livestock as well as supporting the floor load for the barn above. I absolutely love this barn. It’s officially become my dream shop.

There are a number of other remote fjord farms in the region that are preserved by various organizations but unfortunately my visit to the region was a very wet and rainy one. In fact during my stay in Geiranger the roads were being closed one by one around me, so I ended up taking a fairly huge detour upon leaving. Even though I had plans to hike to these more remote farms I suppose being trapped in Geiranger surrounded by epic waterfalls and snow capped peaks isn’t so bad. 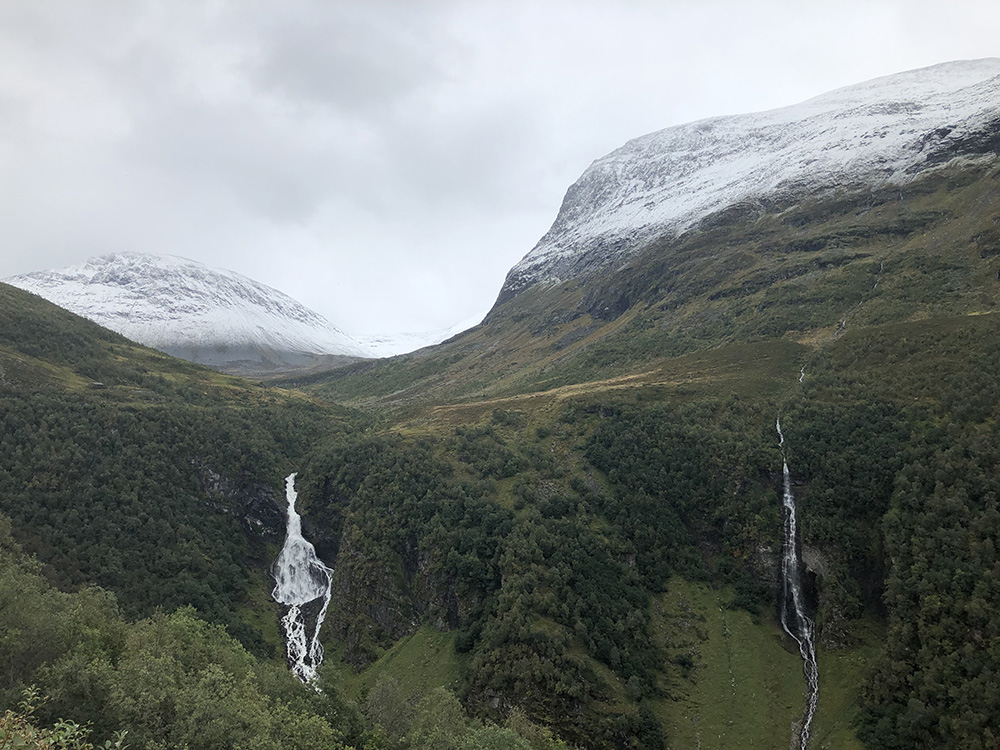 Geiranger is a stunning place, a small town located at the end of a long and winding narrow fjord. Peter Brennvik spent some years working in Geiranger and was quite familiar with some of the older barns around town. The entire area is a listed UNESCO world heritage site as it has been said to be one of the most “scenically outstanding” examples of fjord landscapes in the world. Along with that designation came some money to help preserve the unique artifacts of human culture in the area. A handful of these old barns were restored. So through Peter’s contacts we were able to visit a number of barns close to Geiranger.

Here are some photos of those barns. Again, it’s difficult to convey the unique character of each of these buildings but I hope these photos give you an idea of some of the characteristic features found in the area. Many of these barns were also pieced together from part of older buildings. 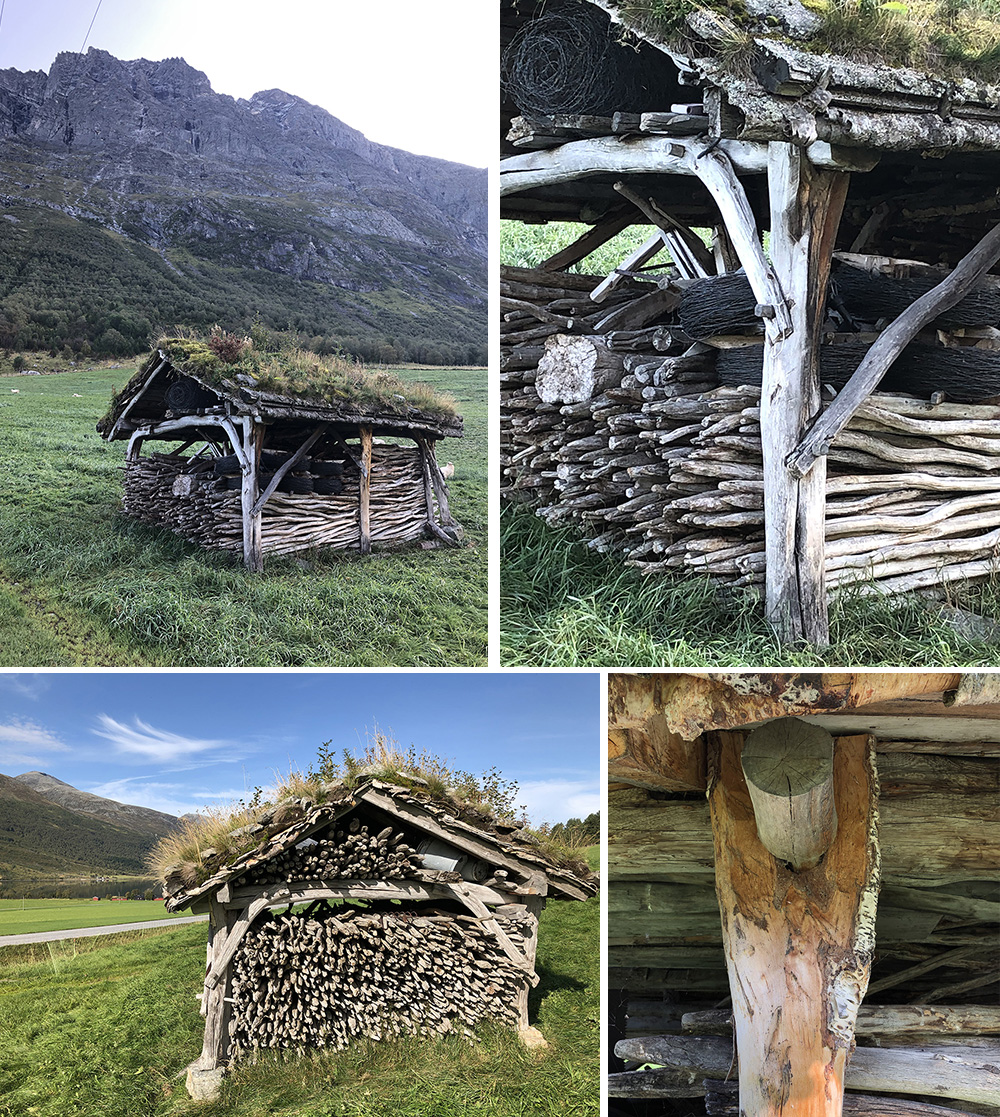 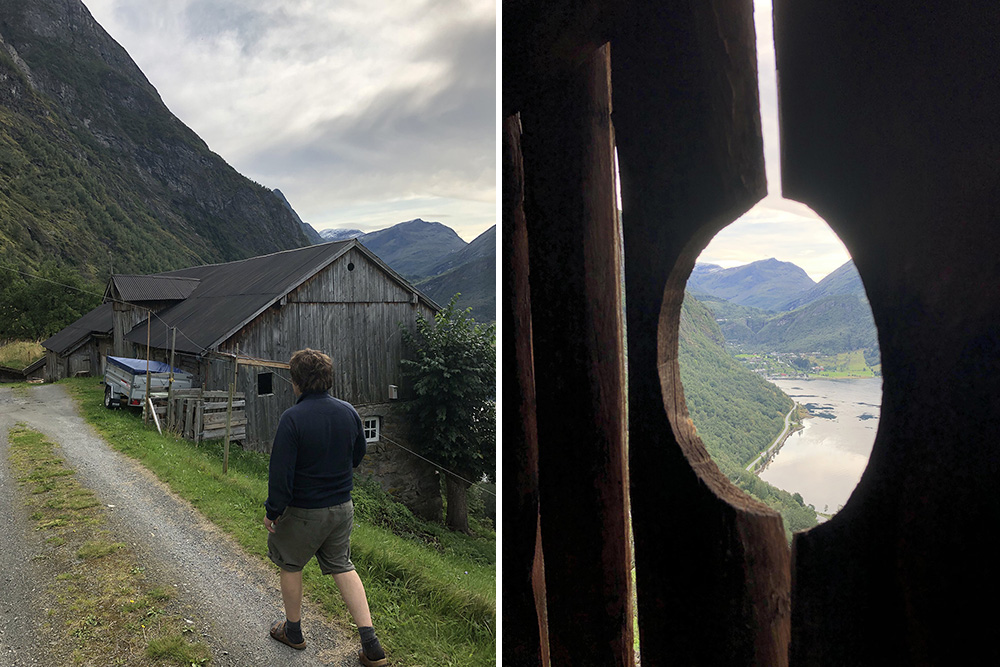 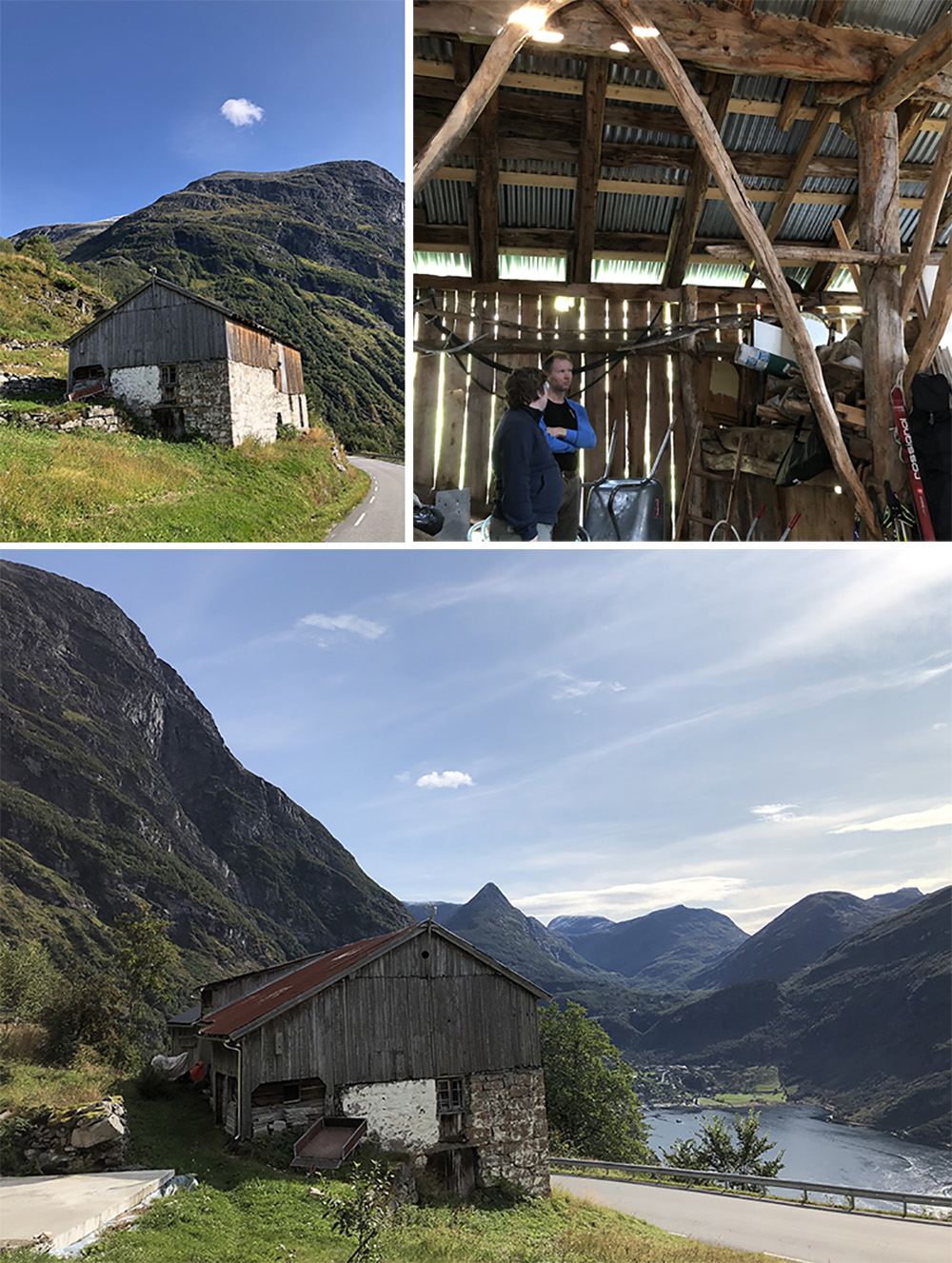 As you can see these grindbyggs come in all shapes and sizes.  With this new inspiration I’d love a reason to build more of these. Perhaps you need a carport or a new grilling space behind your cabin? Help me spread the word.