Time Spent with the Sami in Rural Sweden 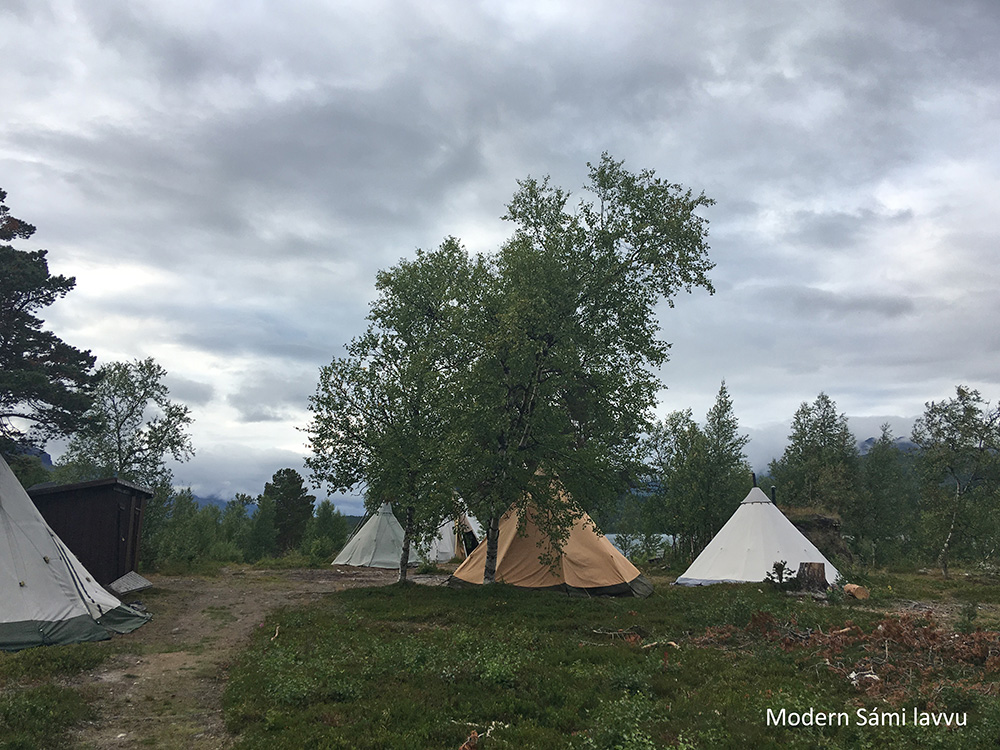 Recently returned from an extended visit to Scandinavia, Marybeth reflects on time spent with Laila, a respected Sami culture-bearer in rural Sweden.

I’ve been back from my travels in Norway and Sweden for almost a month now, but my mind is still reeling from everything I experienced there and the impacts it will have on both my daily life and craft back home.

One of the experiences that I find myself reflecting on most often is the time that I spent in the rural village of Saltoluokta in Northern Sweden.  Shortly after Täljfest, I started my two-day drive north, beyond the arctic circle, where I would catch a ferry to this remote Sami village that is off the road system.  I had very little communication with Laila, the Sami woman with whom I would be living and studying, before arriving and only knew that she was considered a respected culture bearer and that this time with her could be very interesting.

At the end of my two-day drive, I pulled off the road that was winding its way through Stora Sjöfallets / Stuor Muorkke National Park (locations in this region bear both their Swedish and Sami name) into a dirt parking lot where I would leave my rental car for the next six days.  I walked down to the dock, not really knowing what to expect, but finding it completely empty and deserted. 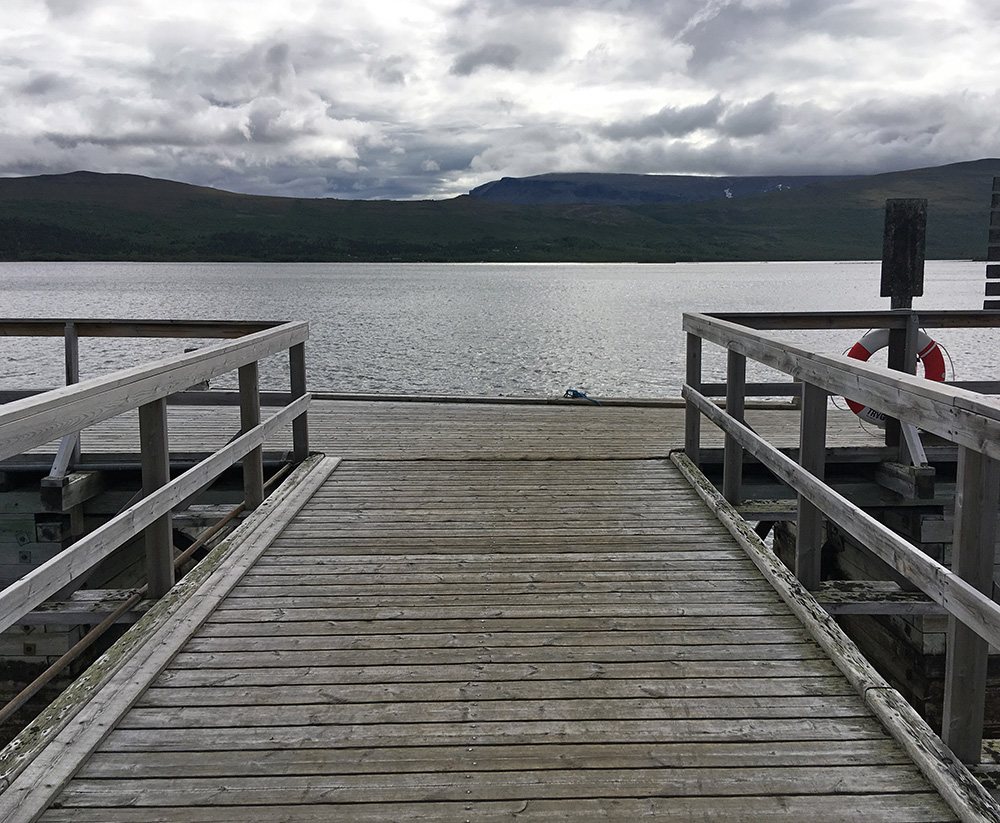 I had arrived about 45 minutes before the last ferry of the day was expected to depart, so I made my way back up to the parking lot, snacking from the blueberry plants carpeting the ground along the way, and poking around the moss and rock covered forest.  Finally, I heard the faint rumble of the ferry arriving at the dock, so I made my way down to cross the lake.  The only reason this ferry exists is for the STF Mountain Station that is situated right next to the Sami village and is a popular jumping off point for hikers into the numerous National Parks in this region.  I was told that most of the people who take the ferry and spend time at the Mountain Station have absolutely no awareness of the Sami village right there in its midst.  This village is along a historic reindeer migration route and Laila’s family has spent time here every spring and fall for too many generations to count. 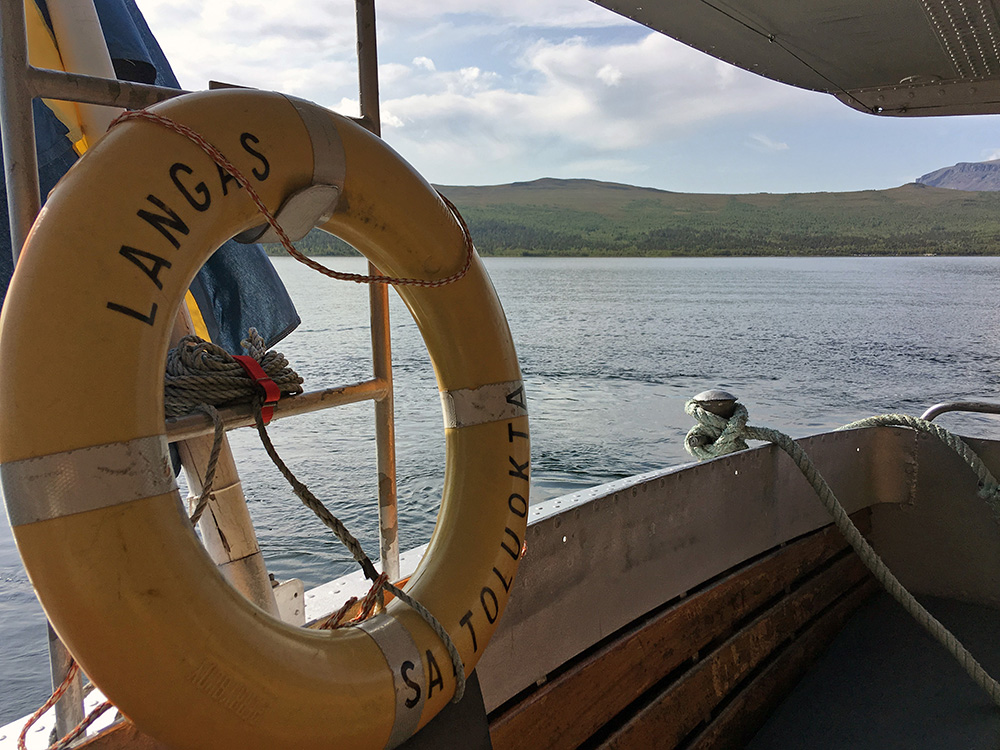 I mentioned earlier that I was in a National Park.  And yet I was also visiting a rural village.  It took me some time to put everything together, but this region was part of the Laponia UNESCO World Heritage Site which is celebrated for its unique landscape and cultural heritage.  As such, the Sami people were never excluded from this area as has been the case of many indigenous peoples living in areas that became part of the National Park system in the United States.  Laila, and others, are allowed to live, build homes, harvest plants and animals, and generally maintain their lifestyle within this region.

One of my goals for this trip to Scandinavia was to experience traditional craft and culture on a broad level – not just focusing on my specific interest areas, but gaining a larger understanding of the role that craft plays in these countries.  I also have a hard time delineating craft from lifestyle and prefer to lump everything together – traditional craft, traditional harvests and food, sustainable lifestyles, etc. – it all interacts so closely for me.  Why weave a basket if I’m not then going to then go fill it with fiddleheads?  Why make a wooden bowl or spoon if I’m not going to then eat a stew of wild rice and venison from it?  Why carve a canoe paddle if I’m not going to take it on a wilderness canoe trip?  I also would have felt remiss if I did not somehow include learning about the craft and lifestyle of the only legally designated indigenous people in Scandinavia.  Especially since the uniqueness of Sami craft and skill level of artisans is well known throughout the world.

I stepped off the boat in Saltoluokta with almost no expectations and was led up the hill on a walking path to Laila’s home where she was in the midst of hosting a wedding.  I was surprised and uncomfortable and completely out of place, but was shown to my lavvu, or tent, given two reindeer hides and a modern sleeping bag, and then jumped in to help prepare the wedding feast.  After much confusion, I came to understand that the wedding party would be leaving on the mid-day ferry the next day, and remaining there with Laila would be myself, a family of three from Germany, and a woman from Switzerland who were all also there to learn.  The only advice I was given was to wake up the next morning ready for anything and to always be prepared for an adventure.

And an adventure I had.  I hadn’t necessarily expected to learn a lot about woodworking or broom-making, but I was definitely very inspired by all of the beautiful, and generations old, woodenware and carved objects in use around Laila’s home.  I also learned a lot about life, about living off the land, about reindeer migrations and villages flooded out by dams, about incorporating medicinal plants into daily life to ward off illness, about making bread from birch bark and pine bark, about “plant bomb” fire starters, about reindeer blood dumplings and pancakes, and about knife sheaths that tell stories.  I was disheartened, though unsurprised, to learn that Sami people have gone through many of the same plights as indigenous people in the United States and many other countries and are still fighting hard for their cultural rights.  After the first night, I slept the rest of my time in a traditional goahti, or sod hut, ate almost my weight in smoked reindeer meat and lingonberries, walked up mountains and along the shoreline, and did a lot of listening – to stories told by Laila, to the lake, to the thunder, and to myself.  And I saw a LOT of rainbows. 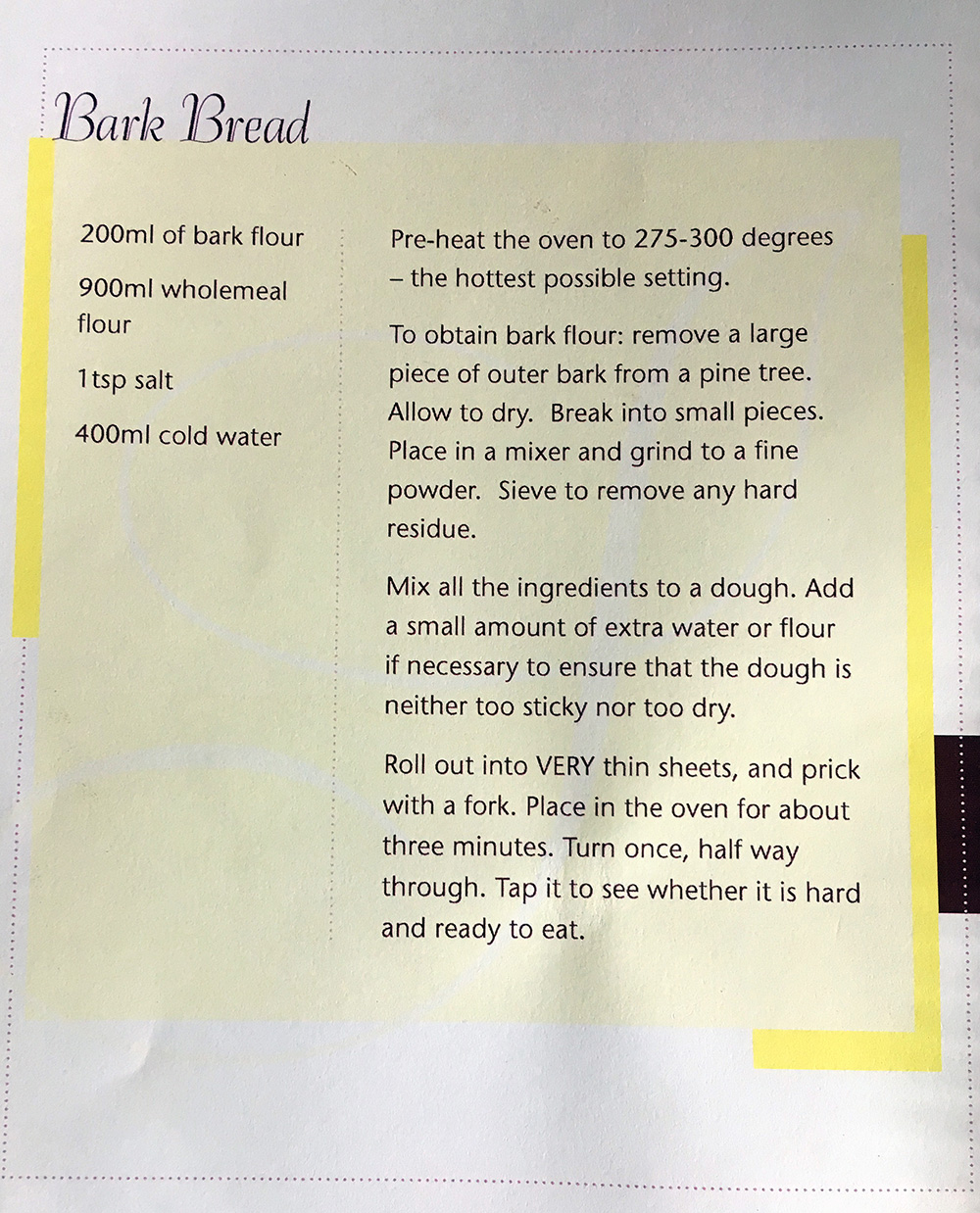 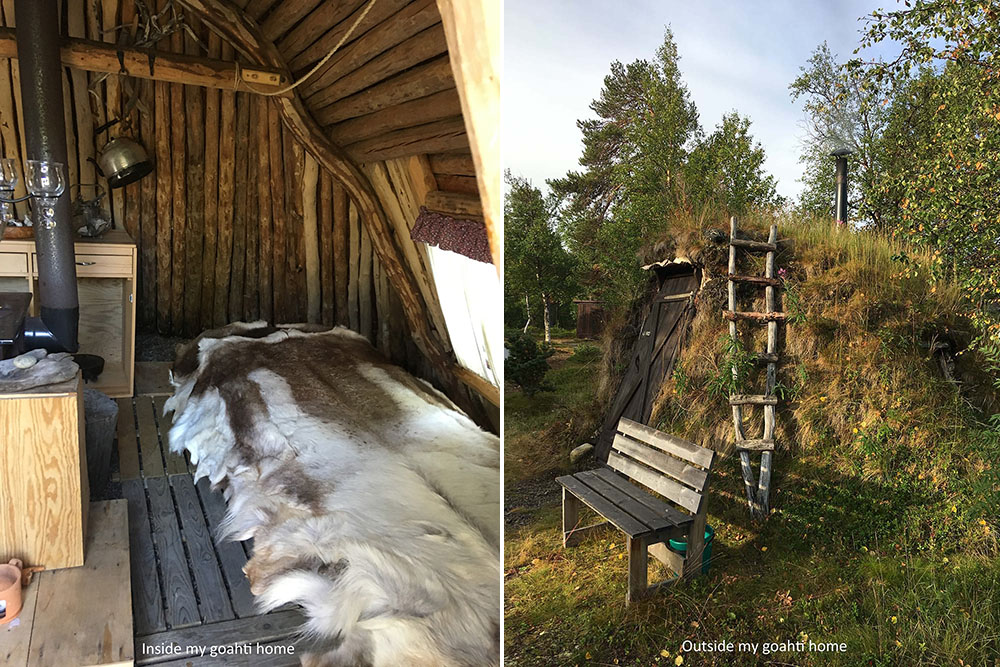 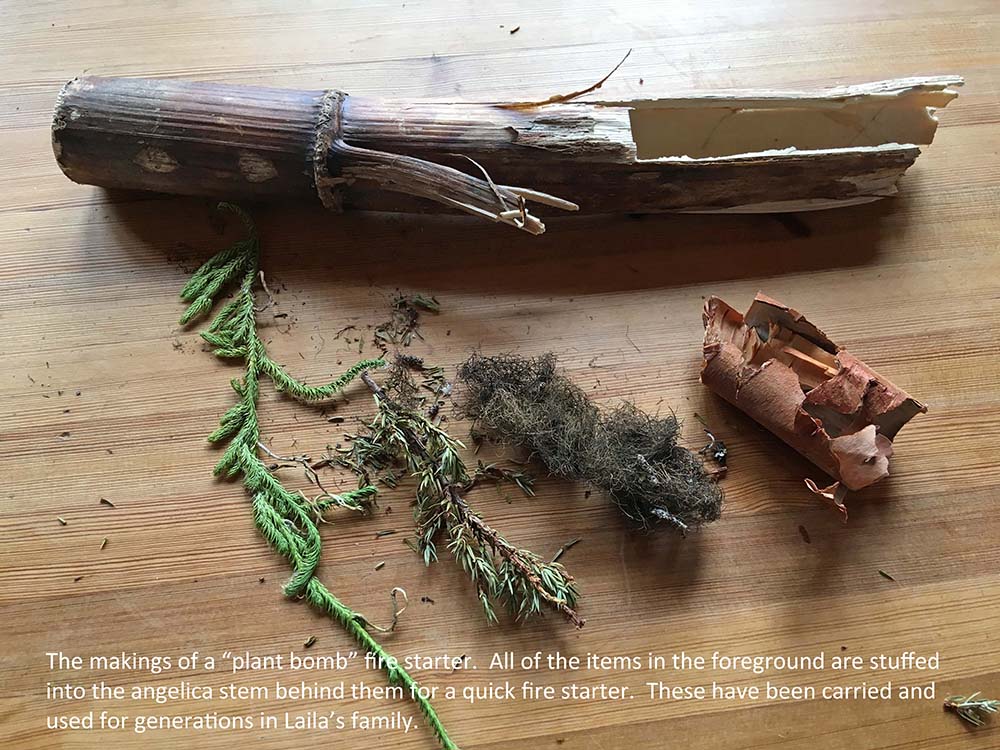 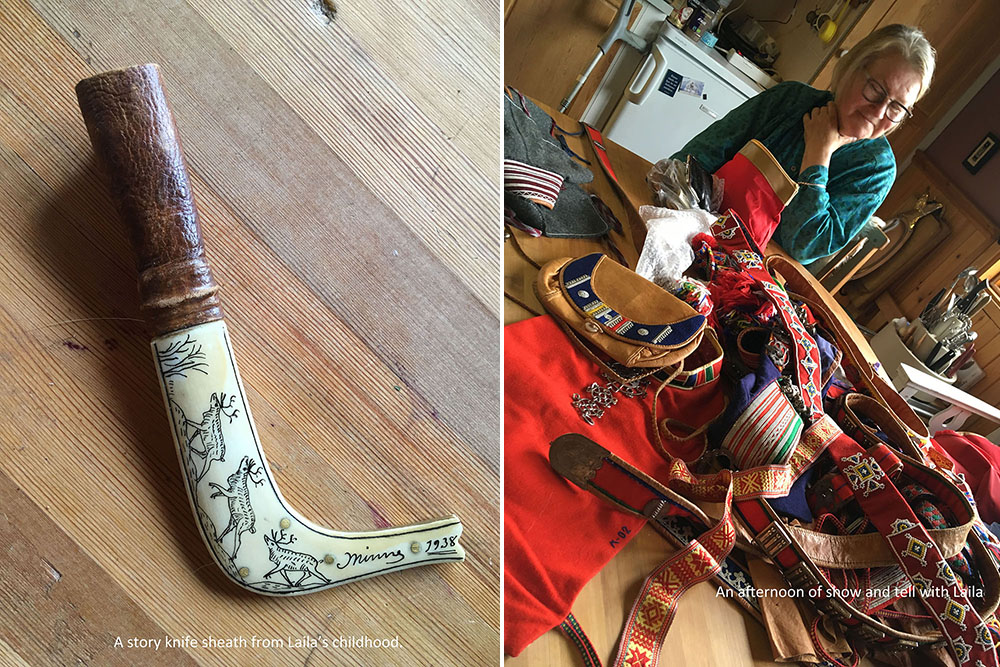 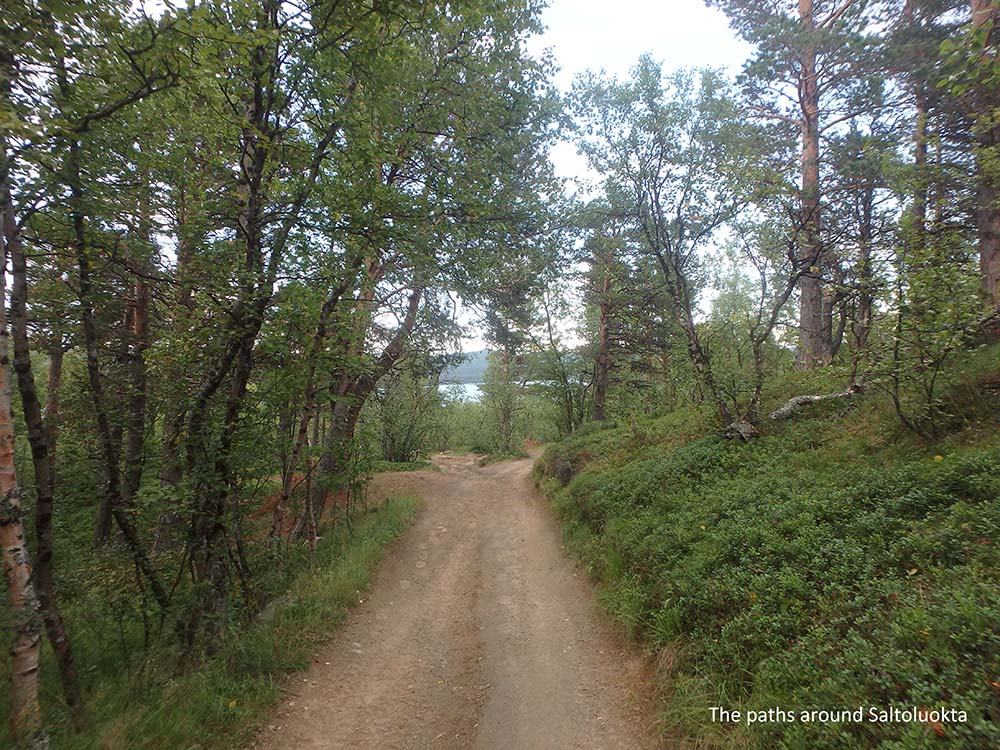 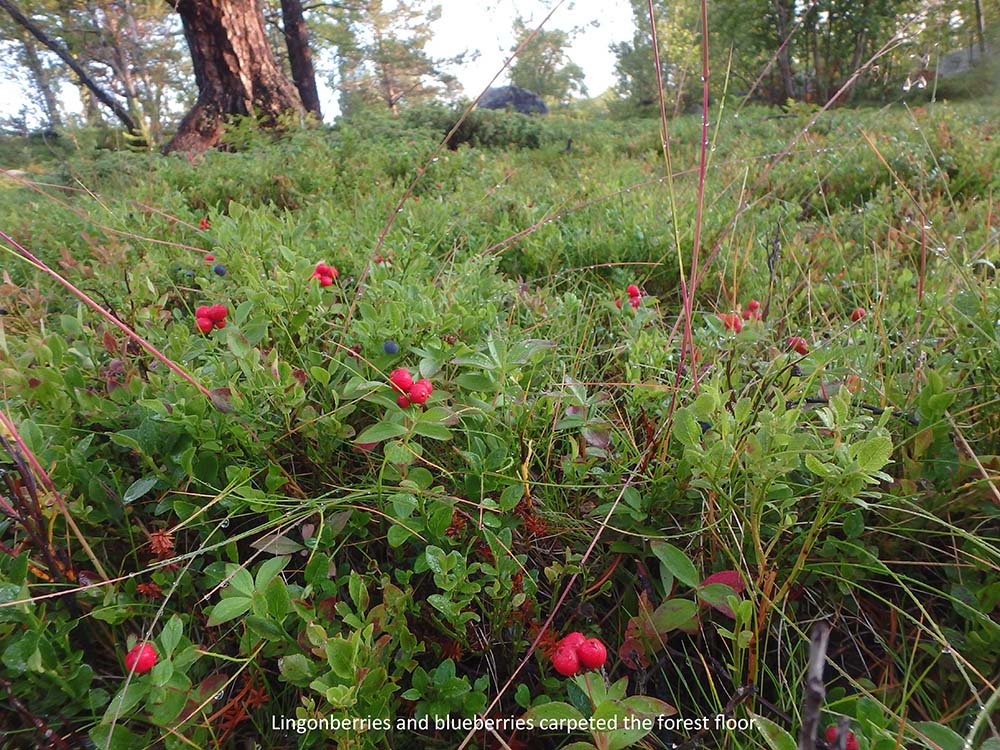 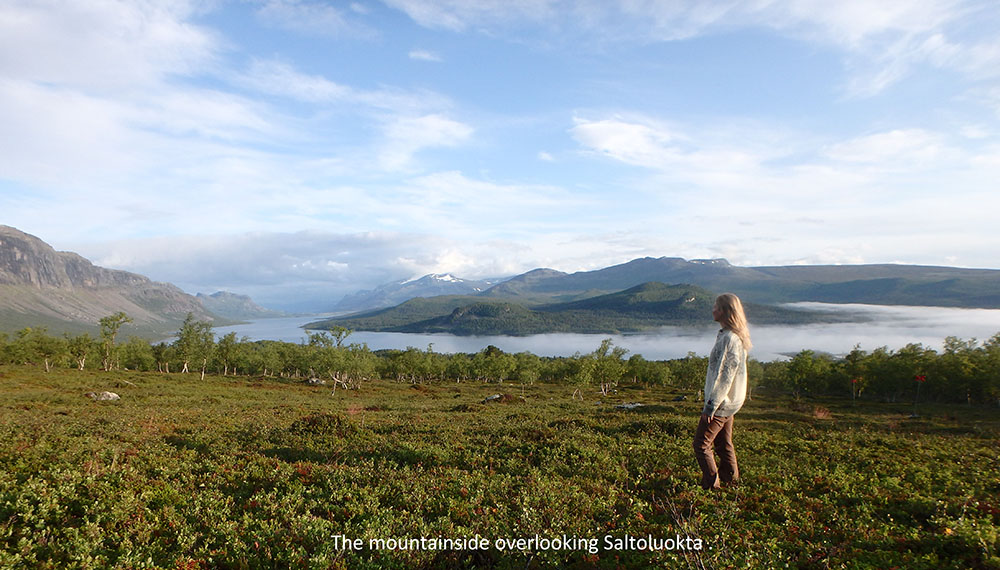